Tag Archive for: Ministry of Defence

You are here: Home1 / Ministry of Defence 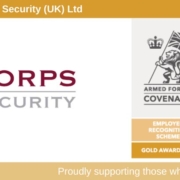 Corps Security was among 139 other companies to be awarded the Employer Recognition Scheme Gold Award for outstanding support towards the Armed Forces community, as announced by Defence Minister Leo Docherty on Friday.

Representing the highest badge of honour, Employer Recognition Scheme Gold Awards are awarded to companies that employ and support those who serve, veterans and their families. To win an award, organisations must provide 10 extra paid days leave for Reservists and have supportive HR policies in place for veterans, Reserves, and Cadet Force Adult Volunteers, as well as spouses and partners of those serving in the Armed Forces. Organisations must also advocate the benefits of supporting those within the Armed Forces community by encouraging others to sign the Armed Forces Covenant and engage in the Employer Recognition Scheme.

This Employer Recognition Scheme Gold Award for outstanding support towards the Armed Forces community comes at a time when Corps is elevating its focus on employee wellbeing and working towards becoming a social enterprise. This year’s awardees bring the total number of Gold holders to 493, which also includes CBRE, global commercial real estate and investment services company.

The Employer Recognition Scheme was launched in 2014 by the then Prime Minister David Cameron, to recognise employer support for the wider principles of the Armed Forces Covenant and the full spectrum of Defence personnel. This includes the Reserves, service leavers, cadets, spouses and wounded, injured and sick. The scheme encompasses bronze, silver and gold awards.

Mike Bullock, CEO, Corps Security said: “Corps was founded to provide employment for ex-servicemen returning from the Crimean War so the roots of our company are firmly ingrained in the military sector. We value every single member of the Armed Forces community employed at Corps. They bring a fantastic skill set and their contribution to Corps is invaluable. We are so proud to receive this very prestigious Gold Employer Recognition Scheme award. It doesn’t end there though. The military sector is so important to us and we’ll work harder to recruit and support those that have served our country as well as developing our client base in the military sector.”