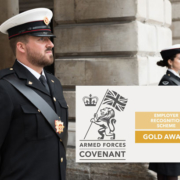 Last month Corps was awarded the Employer Recognition Scheme Gold Award for outstanding support towards the Armed Forces community. It’s something that’s incredibly close to our hearts as an organisation set up more than 160 years ago to provide employment for former servicemen returning from the Crimean War.

The Employer Recognition Scheme Gold Awards are given to companies that employ and support those who serve, veterans and their families. You can find out more about what companies need to do to win here.

While our heritage is firmly entwined with the armed services, we do an enormous amount today to support our veterans and serving forces and that’s been reflected through Corps achieving the ERS silver award for the past seven years. Our military champion, Diz Sollesse, has worked tirelessly over the past two years to help Corps win the coveted gold award in 2021.

Transitioning from the forces to civilian life can be a challenge for many people. Corps provides a supportive environment for more than 300 former servicemen and women in our ranks where they can find meaningful employment in a culture with some similarities to the armed forces so they can adjust. “Anyone with a career in the forces is guaranteed an interview,” explains Diz. “And we ensure they are initially mentored by other veterans who have worked with Corps for longer to help ease their transition. Our veterans report feeling incredibly valued by Corps.”

Supporting reservists is another key tenet of Corps achieving the gold award. We offer two weeks’ additional paid leave to enable our employees to undertake reservist activities. In 2020-21 we supported one of our reservists, Regional Director John Ford, who was drafted into regular service for 10 months on deployment with 7 Sqn at RAF Brize Norton to support the RAF during the pandemic. “We recognise the key role that reservists can play and how important it is for many reservists to be drafted into regular service for a time,” explains Nigel Horne, Major Accounts Director at Corps, who spent nine years in the Royal Electrical and Mechanical Engineers including serving in the first Gulf War. In addition, we support the RAF cadets unit in Uxbridge and offer speakers, including our board member Air Marshall Chris Nickols who had an illustrious career in the RAF, to encourage cadets into aviation.

As a social enterprise, we reinvest our profits back into our business to support our teams but also make considerable charitable donations to create positive social change. We are keen supporters of Combat Stress, the charity which supports military veterans suffering from mental health issues, and also the Soldiers, Sailors, Airmen and Families Association (SSAFA) which provides lifelong support to serving men and women and veterans from the British Armed Forces. In the past year we’ve raised more than £40,000 for these charities through corporate and individual fundraising efforts. We always match employees’ own fundraising. We also support the Poppy Appeal with many of our Commissionaires selling poppies, as well as Armed Forces Week in June where we ran a social media campaign around the SSAFA Salute. Armed forces anniversaries and awareness days are a key part of our company calendar.

Despite achieving the ERS Gold award, we are not resting on our laurels. We are committed to keeping our military values alive and have a number of initiatives in progress over the coming months including our regimental association and veterans’ portal.