You are here: Home1 / Commemorates 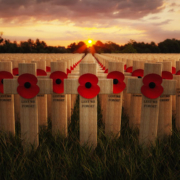 Sunday 13th November, specialist security services provider, Corps Security, will take part in the National Service of Remembrance March Past held at the Cenotaph to remember and honour those who have fought for our country.

Today, Remembrance Sunday, eight officers from Corps Security, led by Nigel Horne, divisional director, will march past the Cenotaph, laying three wreaths on behalf of the Corps associations in honour of the fallen. A Regimental lunch at the Naval & Military Club in St. James’s Square will follow the march past.

Founded in 1859 to provide employment for former servicemen returning from the Crimean War, our founding military values of loyalty, integrity and service prevail today. We still employ many ex-military personnel and remain extremely proud of our 163-year roots in the armed forces.

Marking Remembrance Day this year, a team from Corps Security visited Brookwood Cemetery in Surrey to lay wreaths where Commissionaires are buried. Led by Diz Sollesse, an honorary Australian Commissionaire, the group included former serviceman and Corps divisional director Nigel Horne, among others.

To honour the brave sacrifice of fallen soldiers from the UK, Canada and Australia, the group placed three wreaths at the obelisk commemorating our founder Captain Sir Edward Walter who established the Corps of Commissionaires to provide gainful employment for former servicemen returning from the Crimean War.

Within the cemetery, the group also reflected at several graves of significant commissionaires including Lance-Corporal James Hollowell from the 78th Highlanders and Drum Major William Kenny from the Gordon Highlanders who both held the Victoria Cross.

Shortly after we were founded in 1859, the Corps of Commissionaires reserved an area of the cemetery as a burial ground for our members and their families. Today, our Corps Heritage Project, oversees the active restoration of the grounds with teams clearing and restoring graves and trimming back the undergrowth.