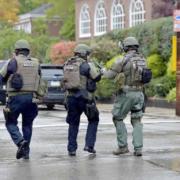 IEDs Mailed out, and Racist Shooting Attacks on a Synagogue – Lessons for the UK

In our previous issue of Corps Relay, we highlighted the potential threats, posed by Neo Nazi and other far-right extremist groups. We also vowed to continue to update readers on the trends relating to this category of extremists.

Sadly however, we have now seen those threats translate into further action, albeit in the United States. The two primary attacks in the USA, have consisted in the first instance, of the extensive mailing of Improvised Explosive Devices (IEDs) to a number of high profile targets, including Democratic Party politicians, including former President Obama, as well as Jewish people, and others. The perpetrator of those attacks, Cesar Syac (of Native American descent) is in police custody, after smart forensic work uncovered his fingerprint on one of the devices.

Fortunately there were no casualties following the ‘barrage mailing’ of those devices, but the second, and most recent attack of 27 October, which consisted of a heavily armed ‘shooter’ (identified as Robert Bowers, now in police custody) burst into a synagogue full of worshippers (who were celebrating a baby naming ceremony), and open fire indiscriminately with an AR15 (M16) assault rifle, resulting in the deaths of eleven worshippers, and many others being injured, including three law enforcement officers.

Some may feel that mass shooting attacks are purely an American phenomenon, and that such shooting attacks (by far right extremists at least) cannot happen here. But such thinking is dangerous, and is countered by the fatal brutal knife, and gun attack in Yorkshire on Jo Cox MP, and the vehicle ram attack at Finsbury Park Mosque, which we covered in our previous Corps Relay.

For churches, mosques, synagogues, and indeed all places of worship, there is a real dilemma as to whether ‘tight and robust’ security should be in place, or whether such places retain an ‘open house’ policy. In fact, there are ways to find a sensible balance in these two ostensibly conflicting cultures.

Here at Corps Consult, we call it the installation of a ‘Welcoming but Secure’ environment.

So, what does that mean? ‘Welcoming’ and ‘Secure’? Aren’t these two terms contradictory?

Well not if the security policy and measures are planned sensibly, proactively, and based upon detailed Risk and Threat Assessments, and professional Security Reviews and Surveys.

Let’s consider these issues by reference to the synagogue attack in Philadelphia, and our own Corps Consult approach. Here in the UK the Community Security Trust (CST) has responsibility for securing the UK’s synagogues, Jewish schools, and other communal institutions. The CST approach, is one that we at Corps Consult share, namely that the emphasis is placed on installing security policies and measures which focus on robust and reliable access control, in the broadest sense of that term, as follows:

In terms of allowing access to the right people, this can be achieved through smart physical and electronic access control, and in the case of places of worship, by deploying guards ‘front of house’ who can stop and check each entrant (in the UK Jewish community, a mix of volunteer and paid guards are deployed). Of course, where an armed attacker or attackers approach, the risks are  heightened, but good training can mean that the guard can spot an attacker at a safe distance, and then act, for example, by closing and locking the door or doors in question, and sounding the panic alarm, and by placing physical barriers against the outer door (an upturned table placed against a door may hold off a shooter for a few vital seconds).

In commercial/corporate premises, CCTV can be used as a means of spotting/identifying hostile reconnaissance, and unusual behaviour in the ‘defensive space’ zones, such as the entrance pathways or and car parks. Of course, only armed police officers can eventually neutralise such armed attackers, but our objective is to ‘buy time’, to slow down the adversary’s advance through a ‘layered’ security approach.

In the Philadelphia attack, the synagogue had apparently installed ‘fast opening’ door mechanisms on the emergency external doors, but they unfortunately, had no guard on the main entrance door, as they wanted to preserve the ‘open house’ policy, but as stated earlier, having a polite but well trained guard deployed at a door, can be both a deterrent, and a vital segment in the ‘stopping and challenging’ layer of the security measures. I personally have only ever felt good, safe, and indeed welcomed, when stopped, and challenged politely, by a smart and well trained security officer, wherever and whenever security is in place.

Incidents such as these are also timely reminders of the need to have tested, and drilled emergency and contingency plans in place. Having designated internal safe havens; Full and Partial lock down procedures; Evacuation and Invacuation procedures; Effective communications; Panic Alarms, are all vital components in the overall security plans.

We also set out below some guidance for identifying IEDs and Vehicle Borne IEDs:

What to look for: