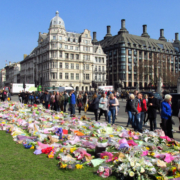 Hello and welcome to the 22nd issue of Corps Relay – the newsletter designed to help you protect your people and property. The brutal terror attack in Westminster on 22 March is further proof (if any were needed) that terrorism can rear its ugly head in the UK, with devastating effect. The Corps Relay Team takes this opportunity to express its condolences to the relatives and friends of PC Keith Palmer, and all the other innocent victims of this cruel attack. Our two special bulletins can be found HERE and HERE.

In light of recent events we have focussed on preparation and training should a terrorist attack occur. Firstly, we summarise the National Stakeholder Menu of Tactical options, a document which outlines ways to enhance your security, before we explain how Corps Security has become a self-provider of Project Griffin training. We end with our usual summary on Armed Police activity.

Corps Relay was pleased to see that the National Counter Terrorism Security Office had released the National Stakeholder Menu of Tactical Options. Below is a summary of the document.

The National Stakeholder Menu of Tactical Options is a document that can be used by either the private sector or security industry that outlines ways in which they can enhance their security position in times of raised terrorism threat levels.

These options can be used in conjunction with the Police Service’s ‘National Menu of Counter Terrorism Tactical Options’ or independently.

At the end of each issue of Corps Relay we include the current threat levels facing our country from international and Irish terror.

Each level of threat has a different response needed from the security industry, and these are:

The following principles should be central to any decisions:

Menu of Tactical Options If there is an increase in threat level, then the following list of tactical options should be considered by your business to help ensure security on your premises:

Can you give me some background to Project Griffin training? Project Griffin is the national counter terrorism awareness initiative for business produced by NaCTSO to protect cities and communities from the threat of terrorism.

The aim of Project Griffin is to:

What is your role within the training?

Now that we can self-deliver my role is to act as the link between the Police and Corps Security to provide updates and reports on modules that are taught along with the number of personnel trained.

How did we go about becoming a self-deliverer of the training?

What was the process?

I first heard that Project Griffin was available to be self-delivered from the Crime Prevention Association meetings that I attend monthly which are held by the City of London Police. The reason the Police decided for this to be self-delivered was due to the number of people they wish to be trained. The average number of people the Police were training annually was around 100,000. By allowing self-delivery they hope this will reach 1 million trained annually. Knowing the importance of the training and how good it would be to self-deliver I got in touch with the Police and arranged for a contract to be written up between Corps Security which would enable the company to self-deliver.  I had to speak to a number of people to arrange this between Corps Security and the Police as at first only limited companies were allowed to hold a contract. This has now been changed.

How do you think this helps the officers who get trained?

This benefits not only Corps Security staff but also allows us to deliver the training to the client and the tenants as well as, other service partners in the building. We can provide updated training when needed and out of the 14 available teaching modules available, can pick and choose which ones are relevant to the individuals being taught. This allows us to be very flexible with this training and carry out refreshers when necessary. Before we had to wait until sessions were available but now can deliver these as often as we like.

Why, do you think, is this training important?

With the ever changing threat from terrorism it is essential for not only security but all members of the public to be aware of what to look for and how to report. The more people are aware the more protected we all are from terrorism.

Armed Policing in the UK – An Update

In his last speech as commissioner of the Metropolitan police, Sir Bernard Hogan-Howe has said that armed police shouldn’t be afraid to shoot their weapons. In his speech to the Royal United Services Institute, Hogan-Howe stressed the importance of trusting our armed officers and to treat them less suspiciously. He did also say that he was concerned with the way that officers who are involved in shooting accidents are treated, saying some shootings take too long to investigate.

“We can’t afford to have officers think twice because they fear the consequences of shooting someone. That’s how they get shot, or the public gets hurt, or a criminal gets away with a gun.”

There seems to be a similar thought throughout the Metropolitan Police regarding armed officers. Here at Corps Relay, we have been following a Metropolitan Police Federation’s survey that indicates that nearly half of all Met police officers want more firearms specialists. This survey was answered by approximately a third of all Metropolitan police officers over the last three weeks of January, and another finding was that three quarters of all who answered believed that all officers should be issued with Tasers.

Sir Bernard Hogan-Howe has been replaced as the commissioner of the Metropolitan police by Cressida Dick, the first female to be appointed to the role.

Future issues of Corps Relay will continue to provide updates on policing and security here in the UK.