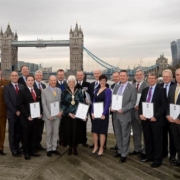 The 27th of November could certainly be deemed a success in the Corps Security calendar as it scooped two top awards in two prestigious award ceremonies simultaneously.

Firstly at the SaBRE Defence Employer Recognition Scheme event the company was presented with a silver award in national recognition of its commitment to the Armed Forces.  Held on board the HMS President, The Defence Employer recognition scheme rewards and recognises UK employers for their support and commitment towards Defence.  The scheme encompasses gold, silver and bronze awards for employer organisations which pledge, demonstrate or advocate support to the Defence community and align their values and activities with the Armed Forces Corporate Covenant.  Silver award holders demonstrate support for Defence, employing at least one reservist, actively communicating and upholding a positive stance to their employees via established HR policies and procedures.

The second success of the day was at the IFSEC Security & Fire Excellence Awards 2014, where once again Corps Security had its excellence in human resources (HR) recognised by winning the prestigious Inspiration in HR Award. The company was also a finalist in two other categories – Security Guarding Company of the Year and Event Security Team of the Year – at a ceremony and gala dinner, which took place at the famous Hilton Hotel in Park Lane, London.

Now in their sixteenth year, IFSEC’s Security & Fire Excellence Awards celebrate the practitioners and projects that represent the best the industry has to offer. Award entries were judged by a panel of independent experts from all areas of the fire and security sector including end users, academics and the police.

The Inspiration in HR Award acknowledges the outstanding work of HR teams and recognises those who make a significant impact in terms of management and corporate performance. Corps Security’s success follows its triumph in the same category in 2012 and cements its position as a pioneer in employee engagement, care and career progression within the security industry.

Corps Security’s nomination was based on the achievements of its HR team when tasked with assessing the wider needs and concerns of client facing personnel. It devised a bespoke colleague engagement survey called Your View Matters (YVM) and established a range of initiatives to address the needs and concerns that were highlighted.

The completed surveys were analysed and each regional management team was given a presentation by HR summarising the results at both national and regional level. From those presentations each region and branch, in conjunction with HR, devised its own programme and specific written action plan to improve the scores. The measures introduced included team briefing sessions, counselling and bespoke training.

When compared to the previous year’s survey results, this year there were improvements in four of the five categories, with the other category recording the same percentage score as 2013. YVM has had an overwhelmingly positive effect on Corps Security’s operation, with contract retention at its highest ever level, shift fulfilment consistently over 99 per cent and employee turnover at just under eight per cent.

After installing these two new additions into the ever expanding award cabinet Corps Security’s chief executive, Peter Webster, commented, ‘I’m incredibly proud of the teams that have been involved in securing these awards. We continually invest in our people so they get the knowledge and skills they need to advance their careers and I’m delighted that there is an external mechanism that also acknowledges their achievements in this way.’