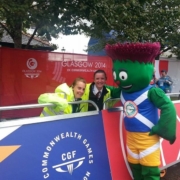 It was the third time that Scotland had hosted the Commonwealth Games, and there was enormous public interest and support for it. Featuring 17 sports over 11 days of competition, 261 different medal events took place in 14 individual venues on three compact site clusters to the east, south and west of the city centre.

With such a busy competition agenda and a high density of people in and around the venues, ensuring the safety of athletes, spectators and officials, as well as property and assets, was of paramount importance. As a result, Glasgow 2014 recognised the need to use specialist security solutions experts, which is why Corps Security was appointed in January 2014 to provide event security and related services for the Glasgow Green Precinct and nearby Holiday Inn.

‘The Glasgow Green Precinct was the venue for the finish of the marathon as well as the cycling time trials and road races,’ explains Jason Taylor, Corps Security’s event sales and marketing manager. ‘Our key operational objectives were to maintain safety and security in the immediate environment, provide support to the venue management team throughout the deployment, and ensure that any live broadcasts were not disrupted. Meanwhile, at the Holiday Inn, we were tasked with maintaining a safe environment for members of the International Boxing Federation (IBF), who resided there.’

Corps Security has significant experience in providing event management and crowd safety services, which have to abide by strict health and safety legislation. Dedicated to professionalism in this area, members of the company’s senior management team are currently undertaking crowd safety management degrees at Bucks New University, enabling it to boast some of the most well qualified personnel in the sector.

Soon after being awarded the contract, Corps Security began preparing its strategy with the appointment of a project group, comprising experts from across the organisation. Taylor comments, ‘With the project team in place we then initiated a vigorous and robust recruitment process, with the thorough assessment and screening of 853 potential candidates, of which we appointed approximately 60. After being chosen for their particular skills and expertise, the selected individuals were given additional event specific training, with 23 courses completed across the UK by four trainers over a total of 1,344 hours. Also during this time, we were asked if we could undertake additional security based tasks by Glasgow 2014, which we politely declined, as we felt there was not enough time to carry out a thorough recruitment and training process for any additional candidates.’

Deployment began on 16th June and at its peak 117 Corps Security licensed officers were in operation, carrying out a variety of roles including crowd safety, event CCTV monitoring, VIP and athlete protection and general event security.

Explaining some of the challenges faced, Taylor states, ‘We needed to maintain an excellent standard of reliability and colleague engagement throughout. This was achieved through the implementation of a consistent management structure and allocation of duties, which was also helped by a fantastic attitude demonstrated by all members of the team. I’m particularly pleased to report that we achieved 100 per cent attendance throughout the period of deployment, which concluded on 15thAugust. This is remarkable given that 2,075 shifts were completed.’

Corps Security was one of 17 security and crowd safety service providers working at Glasgow 2014. This necessitated cooperation and collaboration between these organisations but also meant that each was able to provide personnel of the highest calibre. Ultimately, this proved an enormously successful strategy and demonstrated the lessons learnt from the problems experienced at the London 2012 Olympic and Paralympic Games.

Bert van Horck , Head of Event Services at G2014 is delighted with the role Corps Security played in the success of the XX Commonwealth Games, and concludes, ‘I was thoroughly impressed with the professionalism displayed and the way that officers carried out their tasks in an effective, efficient and polite manner at all times. The company is clearly a leader in its field and was able to deliver a quality service in the uniquely pressurised environment of a high profile global sporting event.’

Subsequent to its work on this project Corps Security’s Commonwealth Games Event team has been nominated as the ‘Event Security Team of the Year’ in the Security & Fire Excellence Awards 2014.