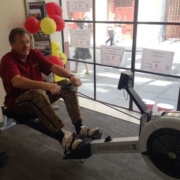 With an early evening start at the Corps Security headquarters in Cowcross Street, London, the team took it in turns on a static rowing machine to row all through the night and all of the following day.

The team, which included Gary Broad, Rob Hill and Jason Taylor, were in full view of passers by throughout the gruelling event and £200 of the money raised resulted from public donations who dropped money into collection buckets on the street.

The money will be evenly split between the company’s chosen charity – the Royal Marines Charitable Trust Fund – and the individuals’ preferred charities which are the Birmingham Children’s Hospital, Cornwall Air Ambulance Trust and Mind.

Participant Gary Broad said: “We would like to take this opportunity to thank the general public, colleagues and business partners for their support and generosity. It was a really tough challenge but the camaraderie kept us going and we’re delighted with the total amount raised.”

For anyone still wishing to make a donation, please visit the Virgin Money Giving page on http://virginmoneygiving.com/team/CorpsSecurityRowathon .

With a remit to spearhead business development activities across a wide range of new sectors, Mark’s appointment into this newly created role will accelerate the company’s growth strategy and facilitate increased awareness of the diverse services it offers. Through identifying and negotiating new opportunities for service delivery, he will work closely with large corporate clients to promote Corps Security’s ability to provide the knowledge, expertise and best-in-class service that only a security specialist can.

With a long established and highly successful career within the facilities management (FM) sector, Mark joins Corps Security from Compass Group PLC. As a company director, he oversaw the management of the sales and marketing team, a role in which he achieved exceptional organic growth in key target markets including retail, leisure and hospitality.

Mark is confident that he will build on his already impressive achievements in his new role. He commented, ‘Having worked extensively in the FM sector for over 20 years, I’ve long been aware of the important part that efficient and effective security provision plays in keeping customers’ people, property and assets safe. Security has never been more vital than it is today and Corps Security’s ability to offer specialist services that are carried out to the highest possible standards, means that there is enormous potential for the company to experience significant growth in FM and other key sectors by forming long-term working relationships. I’m delighted to have the opportunity to make this happen.’

Mark is particularly impressed with Corps Security’s ability to combine traditional values with a modern approach. With its motto of ‘loyalty, integrity, service’, its fresh, friendly and flexible approach means that it is already the specialist security solutions provider of choice for organisations across a wide range of business and operational sectors.

Welcoming Mark on board, Corps Security’s chief executive, Peter Webster, concluded, ‘Having a background in FM myself, I’ve long been aware of Mark and his exceptional professional achievements. When we decided to appoint a major account development director, he was the ideal candidate and, therefore, I’m thrilled that he has joined us. I’m looking forward to working with him in taking Corps Security to the next level of success.’ 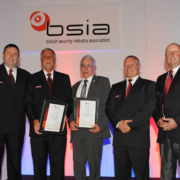 Now in their sixteenth year, the BSIA Security Personnel Awards pay tribute to those who go to extra lengths to exceed expectations. James Kelly, chief executive at the BSIA, commented, ‘It is always fantastic to see the high level of achievements within the security industry. The awards are always so hard to judge due to the exceptional standard of applicants, and this year was no exception.’

The Best Team accolade went to Corps Security’s 27 strong contingent operating at the Commando Training Centre Royal Marines (CTCRM) in Lympstone, Devon. With up to 1,500 Royal Marines trainees on-site at any one time, the CTCRM has to be tightly guarded and protected from the possibility of a terrorist or other security threat. The site is extremely busy, with people entering the facility through two main access points on a 24-hour basis.

The Corps Security team is charged with checking personal identity cards and vehicle passes, and carrying out vehicle checks. Not only do the individuals in the team have to work well together, they also enjoy a great relationship and rapport with the staff and trainees at CTCRM. This was recognised by the judges, who identified the team’s ability to communicate effectively, carry out their duties with enthusiasm and flexibility, and ‘go the extra mile’ as important elements of the team’s star quality.

While teamwork is highly valued at Corps Security, so too is the dedication of individual officers. This commitment is exemplified in Leonard Brownsword, who won the Service to the Customer award. The 65-year-old is senior site supervisor at the Joint Service Adventure Sail Training Centre (JSASTC) in Gosport, Hants – a 6.3-acre site that provides sail training for the armed forces.

Len Brownsword has worked on the site for 13 years, and has incorporated himself so effectively into the structure of the site that he is not viewed as a contractor, but rather as one of the permanent staff. This means that he often knows well in advance when events are happening and is able to put procedures or staff in place to deal with them. This is all done with minimal consultation in order to avoid any unnecessary work for the customer.

Extremely effective and highly regarded by whoever he has to deal with, the judges praised his loyalty and determination to provide a service of the highest possible standard, as well as his ability to understand JSASTC’s developing requirements from its security team.

‘We strive to provide our customers with a level of service that is unrivalled elsewhere in the manned guarding sector,’ commented Corps Security’s chief executive, Peter Webster. ‘Having this recognised at the BSIA Security Personnel Awards 2014 is confirmation that we are meeting our objectives and I would like to congratulate both Len Brownsword and the CTCRM team on their awards, which are thoroughly deserved.’